Kirtan: The Calling - The Great Power, Grace and Beauty of Kirtan

In this special feature written by kirtan artist, multi-instrumentalist, and ecstatic vocalist Jai Uttal, originally published in Om Yoga Magazine (March 2019), Jai discusses the Yoga of relationship and surrender, and his own experiences with devotion in 1970's India.

Kirtan is the calling, the crying, the reaching across infinite space - digging into the heart’s deepest well to touch and be touched by the divine presence.

Kirtan is singing, over and over, the many names of god and goddess, the multi-coloured rainbow manifestations of the beloved. It is said that there is no difference between the name and that which is being named, and as the words roll off our lips in song, the infinite is invoked, invited, made manifest in our hearts.

Kirtan is part of an ancient form of yoga known as Bhakti, or the yoga of devotion. But in Bhakti we redefine ‘devotion’, we expand the meaning to include every shade of colour in the palette of human emotion, turned towards god through song, dance, and worship. These chants have been sung for millennium by saints, sinners, devotees, and the great primordial yogi alchemists of old. And, as we sing, we touch the spirits of the millions of people across the centuries who have sung the same songs and cried the same tears. As we sing, we immerse ourselves in an endless river of prayer that has been flowing since the birth of the first human beings, longing to know their creator.

Bhakti yoga brings us into the world of mystery, a realm where the dissecting, discerning qualities of the intellect are powerless next to the vast ocean of feelings. For many meditators and yoga practitioners, the goal is union, oneness with the supreme. But in Bhakti yoga we don’t think about any goal, we weep, laugh, cry, sing and dance with our beloved, and ask only for more devotion. Bhakti is relationship; our stormy love affair with god. And Bhakti is surrender; surrendering our personal heart into the great heart, offering our self will and all our efforts and actions to that vast consciousness, to god. “Not my will, but thy will be done.”

In the holy places of India, towns and villages permeated with devotion, magic is a daily occurrence. Perception shifts like clouds moving across the sun. When the aroma of God’s name wafts down a village street we can suddenly find ourselves walking in the ancient footsteps of Ram and Sita, or Hanuman, or Radha and Krishna. Throughout the day, we hear bells ringing, mantras being uttered from every doorway, kirtans bursting from the primitive loudspeakers. We smell incense and flower offerings. We catch glimpses of gods and goddesses around every corner. Doing pilgrimage to the sacred shrines is an invitation to the mystical breath of Bhakti.

Place of worship
The ancient village of Vrindavan, the town that was home to the young Lord Krishna and his beloved Radha, is one of these great sanctuaries, imbued with worship. The lines between the past and the present, the astral and the concrete, are very thin, and pilgrims come from all over India to partake of the nectar of Rasa, or divine emotion, that colours the town. When I first visited Vrindavan in 1971, I was absolutely stunned by the sheer quantity of living temples. It seemed that literally every other building was a holy shrine, and the sound of god’s names reverberated from wall to wall, street to street, crumbling alley to archaic temple.

One day I was walking along Parikrama Road, a path that circumambulates the village. Devotees walk this dusty path (approximately five miles) as an act of worship, feeling that they are ‘Gopis’, circling the body of their lover, Krishna. Walking around Parikrama you see ancient India, priests chanting the Vedas, pilgrims weeping, sadhus gathered around their ‘dhunis’ swaying to the driving rhythms of a kirtan chant, peacocks, cows, on and on. I used to take this walk every morning before dawn, timing it so I could have my first chai of the day watching the blood red sun rise over the Yamuna river. As the sun climbed into the sky my heart never failed to melt at the passionate cries of ‘Radhe’ or ‘Hare Krishna’ that echoed through the misty morning air.

On this particular day, as I was walking away from the river I heard a horrific racket. A young sadhu, covered with white paste, and wearing a simple cloth around his waist was sitting on a small stone wall, banging cymbals together and screaming ‘Radhe Shyam Radhe Shyam Radhe Shyam’ at the top of his lungs. Instantly my ‘shanti’ was shattered. The cymbals seemed louder than the rock concerts I’d left back home in the States. And his raspy voice was like sandpaper to the inside of my brain. Where was the blissful India that I loved?

I hurried my steps and tried to get past him without being noticed. But just then, an old old man in orange robes, bent with age, sporting long dreadlocks, stepped out of the little hut adjacent to the path. The young sadhu became stunningly silent as his ancient guru offered me tea and cookies. We sat and sipped the steaming chai, watching the brilliant emerald parrots fly from tree to tree, sinking into a deep, heavenly meditation, listening to the distant strains of kirtan floating on the gentle wind. What peace.

But, as all things must pass, the chai was finished, the cookies were gone, and the old man dismissed me with a soft smile. I touched his ancient, cracked feet and continued my walk. At that moment the racket began anew. Clang! Clang! Clang! The horrible cymbals! The hoarse, screaming voice! But as I turned around for a last pained look, the magic descended. This old man, who seemed barely able to walk, was dancing in the doorway of his hut. Suddenly his crooked body was filled with the grace and beauty of a young maiden. His delicate swaying hips, his beatific smile, his long flowing hair; the old sadhu had transformed into Radha, the goddess of love! And to complete the mysterious change in awareness, the young sadhu’s kirtan was now the sound of angels singing. His terrible cymbals had transformed into a divine orchestra of tinkling bells and chimes. My heart stopped beating, tears sprung from my eyes. Here was Radha Rani, dancing her love for Krishna, amidst the gardens of Vrindavan.

When it seemed the world would end in an ecstasy of love, the old man simply stepped inside, leaving me to the heat and dust, and the sadhu’s cacophonous song. But my mind was quiet and my heart was full as I continued down the path. I had been given yet another reminder to see beyond the surface reality into what is hidden; to trust the perceptions of the heart before those of the judging mind. I had been given a few drops of grace from the vast ocean of Bhakti.

Jai Uttal is a sacred music composer, recording artist, instrumentalist, and ecstatic vocalist, combines music and inspiration from India with his background in western folk, jazz, and popular traditions, creating a stimulating and exotic multi-cultural fusion that is truly world spirit music. Having traveled extensively in India, where he met many beautiful saints and singers, Bhakti yoga became his personal path. Jai has been leading kirtans around the world for more than 30 years, creating a safe environment for people to open their hearts and voices. His sixth CD, “Mondo Rama”, was nominated for a Grammy award. He recently released a CD of Reggae influenced Kirtan entitled Queen Of Hearts and a collection of Kirtans for kids entitled Kirtan Kids. 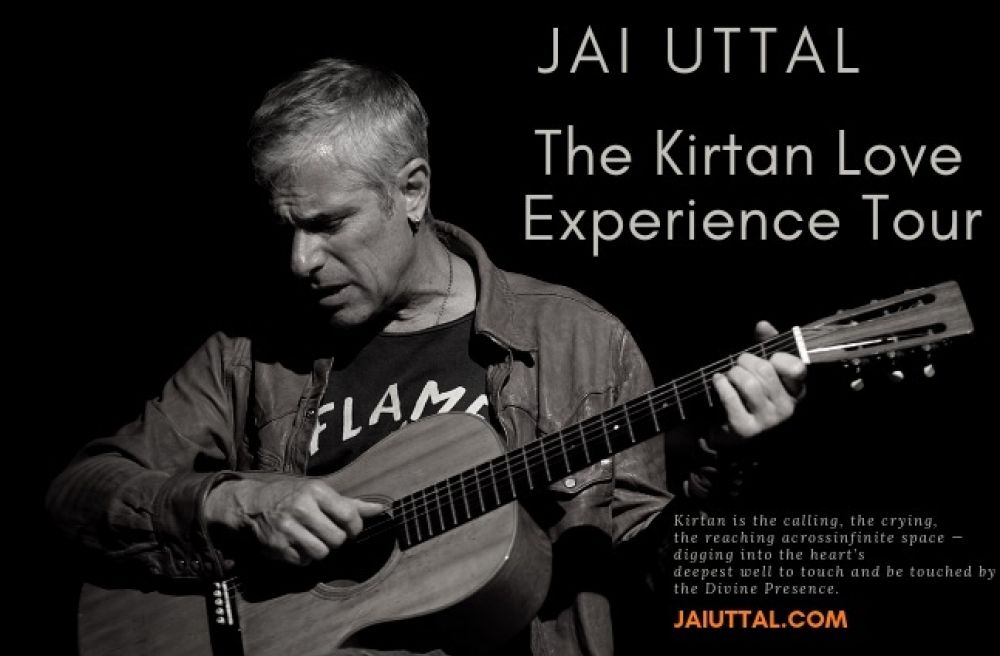